As a Washington Capitals fan it pains me to do this, but after Canada defeated the United States of America, 3-2 in overtime, to win the gold medal in men’s ice hockey at the Winter Olympics in Vancouver, it must be recognized that forward Sidney Crosby is a winner. 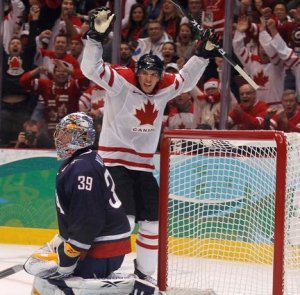 He put the decisive goal past US goalie Ryan Miller, to send the host country into a joyous frenzy. A friend of mine in Toronto immediately posted on her Facebook page that the fireworks were being shot off in celebration near her.

As it happened all I could think was, “there is only one way that this can end that will make me utterly miserable.” And the captain of the Pittsburgh Penguins found a way to torture me further, even with the NHL on temporary hiatus.

Crosby was not necessarily spectacular in the Olympics, but he did what needed to be done to help his team win. At times he seemed like a role player, not wearing a “C” or even one of the assistant captain designations. He still managed to end two games: one as a shootout game-winner, and today to fire the final shot of a tournament that should already have fans excited for 2014 and Sochi.

Crosby now has earned a Stanley Cup championship and an Olympic Gold Medal in his young career. Call him a cry-baby, whiner, or, as I have seen and maybe even said, worse, but you must also call him a winner.

I hope Alex Ovechkin and the Capitals can equal the count with Sid’s Penguins and the Stanley Cup before #8 also gets a chance to earn gold for his home country the way “The Kid” delivered today for Canada.

In a moment of their lives that may never be topped, the athletes of the Canadian women’s Olympic ice hockey team earned gold medals in Vancouver by beating the USA squad, 2-o.

I was obviously cheering for the US team, but I’m incredibly excited for the Canadian team and what this means for them and their country. Many Americans, like myself, would have been excited to have the Star Spangled Banner cap the tournament for the women, but it still would not have been as valuable to as many people. 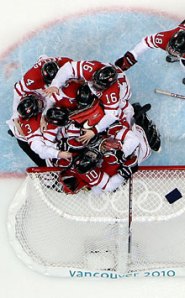 I still hope that hockey gold is awarded with America’s National Anthem during these Olympics, but am just thankful for how passionate each and every hockey player, male or female, has been throughout these tournaments.

Canadian goalie Shannon Szabados made 28 saves in blanking the Americans and launching herself onto a platform as a National hero. She basically stood on her head for parts of the game, similar to what US men’s goalie Ryan Miller has done up to this point in the Olympics.

Forward Marie-Philip Poulin scored both of the goals for the red, white and black clad home team. How fun must that be to win the most precious medal in the most important sport of your country – and look up in the stands and share it with them?

This is a rivalry that will continue to highlight any women’s hockey tournaments, and I love the fact that the US members are probably already circling dates on their calendars for their shot at redemption, even if they have to wait 4 more years and travel to Sochi in Russia for another shot at Olympic gold.

But now the Canadians will be the ones entering those next winter games as defending champions and it is well-deserved.

Our neighbors to the North live for this and I’m happy for them. They have been great hosts for these games – and they were incredible hosts when I visited Vancouver just before Christmas. Congrats on your women’s gold medal, eh.

Czech Republic forward Tomas Fleischmann scored one goal and assisted on David Krejci’s game winner in overtime as the Czech Republic squeaked by Latvia, 2-1 in the men’s playoff qualifier in Vancouver.

Day 12 of the Winter Olympics saw an inspired comeback by Latvia, who scored two 3rd period goals, the second by Mikelis Redlihs with 3:41 in regulation.

The Capitals’ Fleischmann scored on an assist from Krecji in the 1st period and returned the favor to win the game and advance the Czech squad to a Wednesday match-up vs. Finland.

The remainder of Wednesday’s schedule includes USA vs. Switzerland and what some people expected to be the gold medal game, Russia vs. Canada. One of those two teams will go home without a medal. Sweden will play the winner of the Slovakia/Norway game currently in progress.

Such great hockey so far – can’t wait for these games.